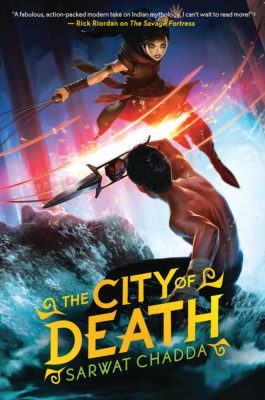 The City of Death

Perfect for fans of Roshani Chokshi and Rick Riordan!

"A fabulous, action-packed modern take on Indian mythology. I can't wait to read more!" -- Rick Riordan on The Savage Fortress

Oh, and the Eternal Warrior of the death goddess Kali.

Just when Ash has settled back into his everyday London life, his friend Parvati arrives with a mission: The evil Lord Savage is plotting to steal the Koh-I-Noor diamond. Ash and Parvati manage to intercept it, but at a terrible price-Gemma's death.

Outcast and heartbroken, Ash returns with Parvati to India, where he meets up with old friends and develops new powers. But he's haunted by Gemma and thoughts of revenge. As he hunts Savage all the way to a long-hidden kingdom, Ash must face the prospect that he may no longer be entirely human . . . and his warrior side may lie beyond his control.
Sarwat Chadda

Sarwat Chadda is the author of the YA novels DEVIL'S KISS and DARK GODDESS. A former engineer, he is very glad to now be constructing stories and not ductwork systems. He lives in London, England, with his family. Visit him on the web at www.sarwatchadda.com and @sarwatchadda.

Ash stepped forward, but Jackie brought her fangs close to Gemma's throat. Gemma lay still and petrified.
\t“The Koh-I-Noor and the girl lives,” Jackie growled. Spittle dripped off her canines onto Gemma's face.
\tThey were maybe thirty feet apart, though it was hard to tell with the fog and smoke. Jackie's fangs were a centimeter from Gemma's bare neck. There was no way he'd make it.
\tJackie's eyes blazed and her fur shivered across her shoulders. “The diamond, boy.”
\tThey had no choice. “Give it to her, Parvati.”
\t“No.”
\t“Give it to her!”
\tParvati stepped back. “No.” Her cold gaze didn't shift from the jackal rakshasa.
\tAsh reached for the knife stuck in his waistband. It was dark, the distance long, and the katar wasn't designed for throwing, but it was the only chance he had."