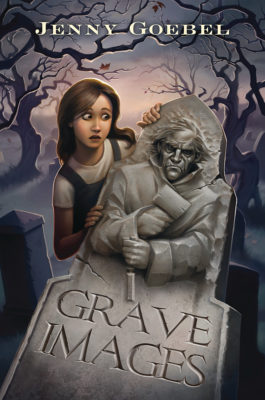 Thirteen-year-old Bernie's summer is looking pretty grim. It's hard to make friends when your family runs a monument company, and your backyard is littered with tombstones. It's even harder when your mother suddenly refuses to leave her room . . .

To make matters worse, her father has just hired a new artist to engrave the headstones--the creepy Mr. Stein. Bernie has a bad feeling about him right from the start, and after snooping around his cottage, she discovers an engraved portrait of their neighbor . . . a woman who promptly dies the next day. And it's not just a weird coincidence. The pattern continues, and Bernie realizes that Mr. Stein has begun engraving headstones before people die, which forces Bernie to ask a horrifying question: Is Mr. Stein predicting the deaths . . . or causing them?
Jenny Goebel

Jenny Goebel is the author of Grave Images, The 39 Clues: Mission Hurricane, and Fortune Falls. She lives in Denver with her husband and three sons.

--- - Mr. Stein extended the hammer away from the chisel, into the night, and then back down. I felt the crack of iron against the stone as loudly as I heard it.

My entire body flinched this time, and then flooded with pain. My heart didn't feel strong, not in the slightest. But I wanted to live. And want was something my heart was used to. Even though I couldn't move, I could feel the want fighting inside me.

“Isabella's heart struggled right until the very end, as well. Resilience is built by hardship,” Mr. Stein said. “That's why the cheery ones die so easily.” Each word spoken was accented by a hammer swing and the chipping of granite. The tools began to glow red in his hands, looking as they must have all those years ago. Fresh from the blacksmith's smelting pot. Right before they were baked in bones.

I thought of Mimi and Dad and even Michael. Then, I thought of my mama, my poor, heartbroken Mama, about to lose a second child on this wicked day.

Mr. Stein's arm fell. Iron connected with iron, and stone cracked. The last thing I remembered before everything went black was the distant sound of a woman's voice crying out my name.