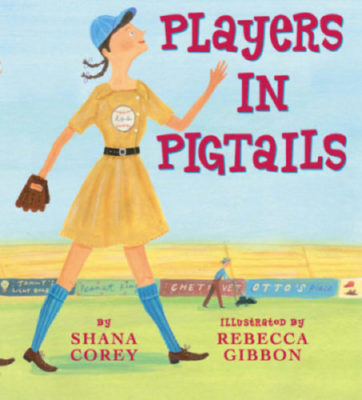 Did you know that one of America's favorite songs, "Take Me Out to the Ball Game," was written about a girl? And that in the 1940s girls all across America were crazy for our country's favorite game?
These little known facts inspired Shana Corey to imagine a story about how one determined girl made her way to the big leagues & found a sisterhood of players in pigtails. With the same exuberant spirit that fueled the formation of the All American Girls Professional Baseball League, joyful text & jubilant pictures celebrate these brave girls' love of the game & the league they called their own.

Shana Corey has the unique ability to make history accessible and fun, a talent that has been praised in all of her celebrated picture books, including MERMAID QUEEN, illustrated by Edwin Fotheringham and YOU FORGOT YOUR SKIRT, AMELIA BLOOMER!, illustrated by Chesley McLaren, which was named a Publishers Weekly Best Book of the Year and an Orbis Pictus Recommended Title. She lives in Brooklyn, New York.