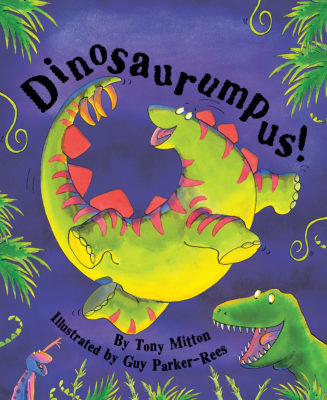 Where can you find a Deinosuchus that practically pirouettes on its tail and a T-Rex that bounds gracefully through the air? Between the pages of Tony Mitton's Dinosaurumpus, where dinosaurs run, boom, shake, and shudder their way to the "sludgy old swamp" and rock the night away. Mitton's delightful rhyme and Parker-Rees's whimsical illustrations will make children want to join in the dance while they learn about some of their favorite prehistoric pals. By the time the romp is over, and the dinosaurs are fast asleep, kids won't be able to shake that jumping, thumping Dinosaurumpus beat!
Tony Mitton

Tony Mitton has written many wonderful books for children, including DINOSAURUMPUS!, DOWN BY THE COOL OF THE POOL, SPOOKY HOUR, FARMER JOE AND THE MUSIC SHOW, and ALL AFLOAT ON NOAH'S BOAT, all published by Orchard Books, as well as PLUM, published by Arthur A. Levine Books. Mr. Mitton lives in Cambridge, England, with his wife and two children.

Guy Parker-Rees is one of today's bestselling children's book illustrators. He is the illustrator of the international bestseller Giraffes Can't Dance, as well as Dinosaurumpus!, both written by Giles Andreae. Guy lives in the United Kingdom with his wife and three sons. Visit him online at guyparkerrees.com.