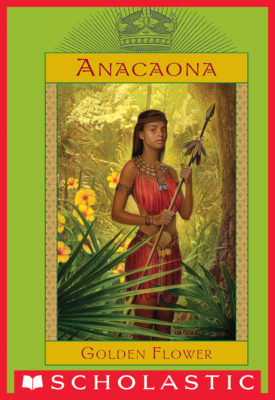 With her signature narrative grace, Edwidge Danticat brings Haiti's beautiful queen Anacaona to life. Queen Anacaona was the wife of one of her island's rulers, and a composer of songs and poems, making her popular among her people. Haiti was relatively quiet until the Spanish conquistadors discovered the island and began to settle there in 1492.

The Spaniards treated the natives very cruelly, and when the natives revolted, the Spanish governor of Haiti ordered the arrests of several native nobles, including Anacaona, who was eventually captured and executed, to the horror of her people.

Edwidge Danticat is the author of many award-winning books, including Breath, Eyes, Memory, an Oprah's Book Club pick; Krik? Krak!, a National Book Award nominee; The Farming of Bones, an American Book Award Winner; and Brother, I'm Dying, a National Book Critics Circle winner. She is also a recipient of a MacArthur Genius Grant. Edwidge lives with her family in Miami, Florida.