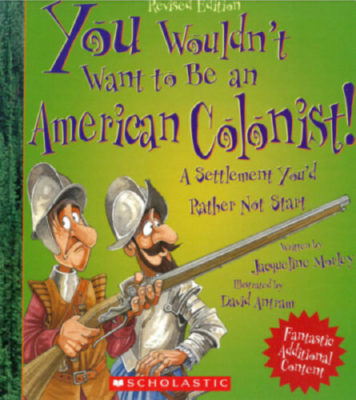 You Wouldn't Want to Be an American Colonist! (Revised Edition) : A Settlement You'd Rather Not Start

his interactive series will enthrall young and reluctant readers (Ages 8-12) by making them part of the story, inviting them to become the main character. Each book uses humorous illustrations to depict the sometimes dark and horrific side of life during important eras in history.

Experience hard labor, drought, famine, and conflict with the Algonquians who are angry with you because you have fenced off their land. Are you tough enough to survive? This new extended edition includes a timeline, a host of fascinating facts including a real 17th-century recipe, and the true story of Pocahontas.
David Antram