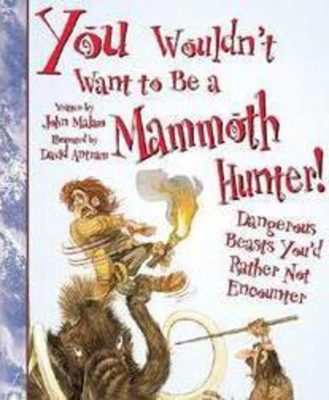 You Wouldn't Want to Be a Mammoth Hunter : Dangerous Beasts You'd Rather Not Encounter

This interactive series will enthrall young and reluctant readers (Ages 8-12) by making them part of the story, inviting them to become the main character. Each book uses humorous illustrations to depict the sometimes dark and horrific side of life during important eras in history.

As a member of the group, you will get an insider's look at what life was like in the ice age as you follow the migratory routes of your prey--mammoths. Learn what tools and weapons are used for hunting, how you prepare for your hunt by holding a sacred ceremony, how to make shelter on the barren tundra, how to catch the woolly beasts, and how your journey has taken you from Asia and Europe to North America via a frozen land bridge
David Antram

John Malam studied archaeology at the University of Birmingham, England, and worked as an archaeologist at historic sites across Britain before becoming a full-time writer. He specializes in children's non-fiction. He has written more than one hundred books, including "An Ancient Greek Temple, Ancient Egyptian Jobs "and "Titanic, Shipwrecks and Sunken Treasure."