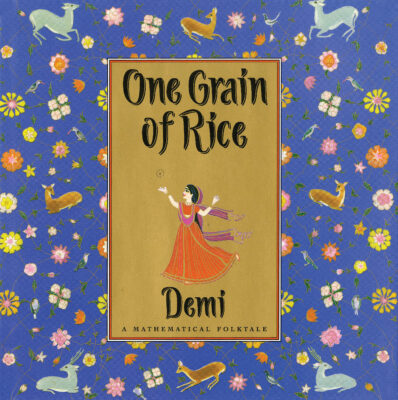 One Grain Of Rice : A Mathematical Folktale

by Demi, Illustrated By Demi

Long ago in India, there lived a raja who believed that he was wise and fair. But every year he kept nearly all of the people's rice for himself. Then when famine came, the raja refused to share the rice, and the people went hungry.

Then a village girl named Rani devises a clever plan. She does a good deed for the raja, and in return the raja lets her choose her reward. Rani asks for just one grain of rice, doubled every day for thirty days. Through the surprising power of doubling, one grain of rice grows into more than one billion grains of rice - and Rani teaches the raja a lesson about what it truly means to be wise and fair.

Demi's exquisitely detailed art, inspired by traditional Indian miniature paintings, combine with her simple retelling to convey the heart and wisdom of this satisfying mathematical tale.

Born in Cambridge, Massachusetts, in 1942, Charlotte Dumaresq Hunt was called “Demi” by her father, a nickname that stuck. Her family was deeply involved in the arts: her father was an architect and actor, her mother was a noted painter, her great-grandfather was the American painter William Morris Hunt, and her great-great-uncle was the architect Richard Morris Hunt. With her mother's encouragement, Demi studied studio art, silk-screening, jewelry-making, mural painting, and ceramics from an early age. She went on to study art at the Rhode Island School of Design, Los Angeles' Immaculate Heart College, and the University of Baroda in India's Gujarat State.

Demi's travels have taken her to many different countries, including Guatemala, Brazil, England, and Japan. She has painted murals in Mexico, and closer to home painted the dome of St. Peter & Paul Church in Wilmington, California. But it was her interest in Eastern art styles and in Buddhism that led her to China, which would provide the inspiration and setting for her first children's book, Lu Pan, the Carpenter's Apprentice, published in 1978. Since then, she has created more than 130 books for children, many of which are adaptations of Chinese folktales. Her work is wide-ranging, however, and also includes concept and puzzle books, picture-book biographies, fables, and novelty board books.

Demi lives in Washington State with her husband, Tze Si (Jesse) Huang. They have one son.