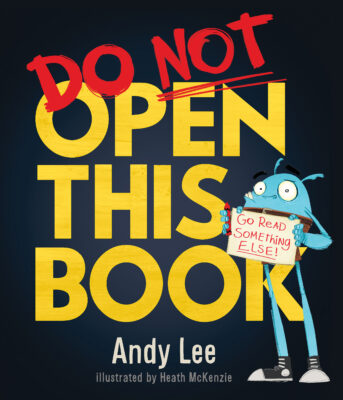 Do Not Open This Book

From the very cover of this picture book, a funny blue monster pleads with readers not to keep reading. As his pleas grow more impassioned, however, readers will delight in doing exactly what they are asked not to do -- no matter the consequences for the blue monster!

This successful series from popular Australian comedian Andy Lee has sold over one million copies worldwide and has been translated into over 35 languages.
Heath McKenzie

Heath McKenzie is a Melbourne-based artist who has worked with many publishers and production companies. Heath is generally inspired by too much television, too many movies, and music (lots of music). He is specifically inspired by movie posters, 50s and 60s commercial art, Japanese signs, and cartoons (anything animated, really).

Andy Lee is a popular Australian comedian known for his work on the award-winning Hamish & Andy radio show and podcast. Do Not Open This Book was Andy's first book.