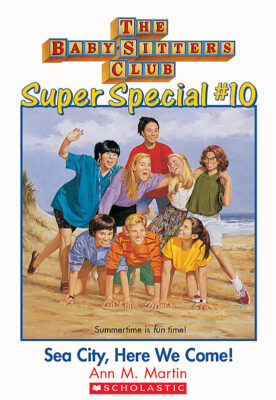 Every summer the Pikes rent a house right on the ocean in Sea City, New Jersey. And they bring two sitters along to take care of the Pike kids. Only this time, the whole entire Baby-sitters Club is going!Mary Anne shows Logan all the sites - the beach, the boardwalk, the infamous Tunnel of Luv. Mallory gets asked out on a date (except it's with Stacey's ex-boyfriend!). And Jessi's busy being Sea City's Super Sitter. In fact, the Baby-sitters are having so much fun, no one's noticed that a gigantic hurricane named Bill is headed straight for Sea City!