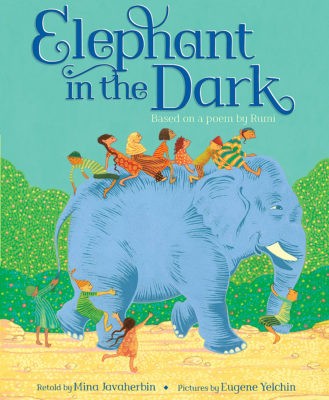 Elephant in the Dark

When the villagers hear of a huge and mysterious creature that has come all the way from India, they steal into the dark barn to find out what it is.

Who is right? Which of them knows the creature's true shape?

Mina Javaherbin was born in Iran and immigrated to the U.S.A. long ago. She is fluent in both Persian and English. She now lives near a beach in Southern California with her husband and two children. This is her second picture book based on a poem by Rumi. Visit Mina at www.minajavaherbin.com.

Eugene Yelchin loves to create books that explore the boundaries of universal truth. He is the author and illustrator of the Newbery Honor book Breaking Stalin's Nose, as well as the illustrator of many distinguished, award-winning picture books. These include Won Ton: A Cat Tale Told in Haiku by Lee Wardlaw, and Elephant in the Dark, retold by Mina Javaherbin. Born in Russia, Eugene now lives in Topanga, California, with his wife and their two children. Visit him at www.eugeneyelchinbooks.com.