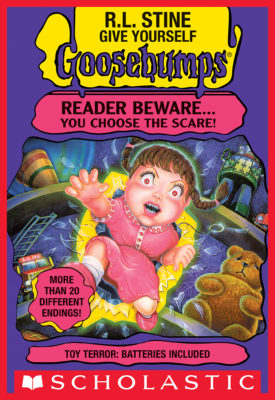 Give Yourself Goosebumps: Toy Terror

Great news! You've won a contest! You get to choose between two really cool prizes: a toy robot or a tour of the Hasley Toy Factory.

If you choose the tour, watch out for the Nasty Kathy. She's a living doll with a bad attitude-and she doesn't like nosy kids like you! Maybe you'd rather choose that toy robot, the Annihilator 3000. You love hi-tech stuff. At least, you thought you did. But now the Annihilator 3000 is using its laser beam to wreck your house! How will you stop it-before it goes after you? The choice is yours in this scary GOOSEBUMPS adventure that's packed with over 20 super-spooky endings!