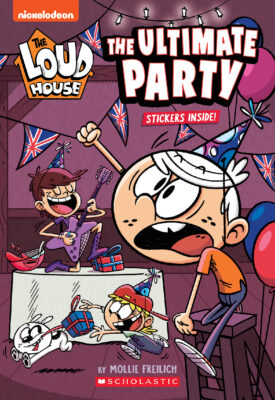 Can Lincoln plan the best party ever?

Lincoln realizes that today is his parents' wedding anniversary. He and his ten sisters have tried to celebrate it before-but it's always ended up such a mess that their parents have asked them to never celebrate it again!

However, Lincoln is determined to make up for past mistakes by throwing the ultimate anniversary party for his parents this year, even though he only has twelve hours to put everything together. Can he and his sisters pull this off? Or are they doomed to fail more spectacularly than ever?
Mollie Freilich

Mollie Freilich is a Los Angeles native who started making up stories as soon as she could speak and writing the moment she could hold a crayon. When she isn't writing, she's either collecting pressed pennies, hiking with her dog, Ziggy, or working as a network executive in animation.