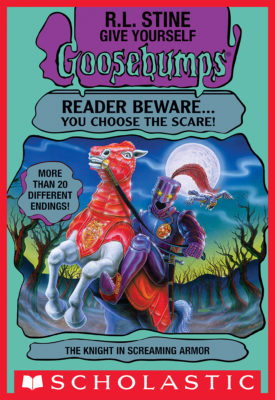 Give Yourself Goosebumps: Knight In Screaming Armor

Your cousins, Kip and Abbey, have come to visit you from jolly old England -- and guess what they brought with them? Two huge crates, each containing a suit of armor and a curse. But it doesn't matter, 'cause you're "dying" to see what's inside.

If you open the crate marked "Evil Knight," you will be hypnotized by the knight's sparkling medallion and will have to face an ugly sorceress. If you open the "Good Knight" crate, you'll discover a room full of mannequin heads that talk. Before you know, it you've lost your head. Can you pull yourself together before time runs out?