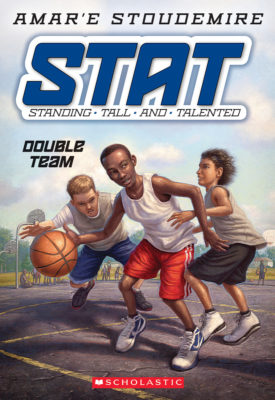 Eleven-year-old Amar'e Stoudemire has finally realized that out of all his hobbies, basketball is his true passion. Amar'e starts competing in tournaments with his two best friends, Deuce and Mike, and they are winning. While they play great together as a team, the real reason for their success is Amar'e's incredible abilities. He's carrying them. After a few big wins, Amar'e starts getting attention from some of the older, more elite players in Lake Wales. They all want him to join their squads. Amar'e wants to elevate his game and the only way to do that is to move on but his friends feel like he's leaving them behind. Without Amar'e they're barely contenders plus he never seems to have time for them anymore.

Based on the life of All-Star NBA sensation, Amar'e Stoudemire, who overcame many obstacles to become one of the most popular figures in sports today.
Tim Jessell

Amar'e Stoudemire, Captain of the New York Knicks and a six-time NBA All-Star, is a well-respected professional basketball player who has left his mark on the game and the community through his award winning outreach. He is focused on creatively inspiring youth to avoid poverty through education. He is the father of three children.

--- - I stopped, popped, and scored. It was 9–9, but now both of my teammates were mad at me.
“I'm working hard down there,” said Mike. “Wouldn't kill you to get me the ball when I'm open.”
“You were all the way under the basket,” I said.
“That's a good thing!” he said.
“I'm just trying to win the game,” I said.
“Oh, what, we're not?” said Deuce.
“No, I know,” I said. “Of course you are.”
What else could I say? How do you tell your best friends you don't think they can beat their defenders? Well, I guess I told them that by scoring the next two points.