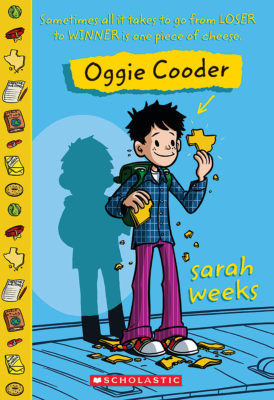 Oggie Cooder has a talent -- he can charve better than anyone else in Truman Elementary School. (Charving, for the uninitiated, is the carving of a piece of cheese with one's teeth.) Oggie doesn't think this is anything special -- but his whole school will soon be disagreeing with him. Because after he inadvertantly charves during a nationwide hunt for unusual talents, his charving puts him on the path to fame and forture. Suddenly, he's the star of the school . . . but he's not sure that he wants to shine that way.
This is Sarah Weeks at her best -- funny, clever, and kid-friendly.