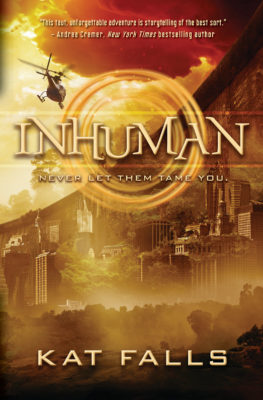 Step into the Feral Zone, where the stakes are high, the romance is steamy, and the dangers are unlike anything you've ever seen. . . .

Lane McEvoy gets the shock of her life when she learns that someone she loves has crossed into the Feral Zone, the forbidden wilderness east of the Mississippi River. Few have dared set foot in the Zone since the devastating biological disaster that killed millions and left the survivors . . . changed. But now Lane has little choice. She travels east, completely unprepared for what she finds in the ruins of civilization . . . and afraid to learn whether her humanity will prove her greatest strength or a fatal weakness.

In this bold and utterly original trilogy, acclaimed author Kat Falls brings you to the very edge of civilization and dares you to jump.

Kat Falls is the author of Inhuman, Dark Life, and Rip Tide. A graduate of Rensselaer Polytechnic Institute, she holds an MFA in screenwriting from Northwestern University, where she now teaches. She lives in Illinois with her husband and three children.

I''d never been so close to the top of the Titan before and the sheer enormity of it loosened a flutter in my chest. The reparation wall, the quarantine line, the blight - all the names for the wall, even the bitter ones, were said with awe. Because the Titan wasn''t just any wall. At seven hundred feet tall, it towered over downtown Davenport and stretched to infinity in either direction. The guards stationed along the top all had their guns and telescopes pointed east, toward the half of America that was lost to us - now known as the Feral Zone.

That''s what really carbonated my blood: the thought that via toy hovercopter, I might finally get to see what was over there. When the wall went up eighteen years ago, that part of the country became as mysterious to us as Africa was to the rest of the world in the nineteenth century. The Feral Zone was our Dark Continent.

Anna, however, seemed immune to the zone''s allure. She took one look at the gun turrets and scooted back, her dark skin ashen. "This is a very bad, very stupid idea."'