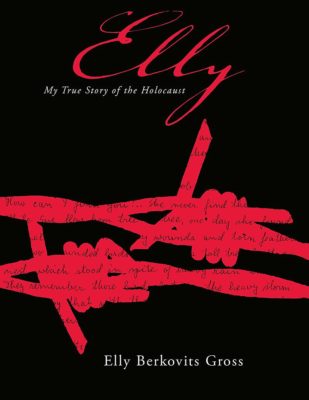 Elly: My True Story of the Holocaust

Told in short, gripping chapters, this is an unforgettable true story of survival. The author was featured in Steven Spielberg's Survivors of the Shoah Visual History Foundation.At just 15, her mother, and brother were taken from their Romanian town to the Auschwitz-II/Birkenau concentration camp. When they arrived at Auschwitz, a soldier waved Elly to the right; her mother and brother to the left. She never saw her family alive again. Thanks to a series of miracles, Elly survived the Holocaust. Today she is dedicated to keeping alive the stories of those who did not. Elly appeared on CBS's 60 Minutes for her involvement in bringing an important lawsuit against Volkswagen, whose German factory used her and other Jews as slave laborers.
Elly Berkovits Gross

Elly Berkovitz Gross was born in 1929 in a small town in Romania. At the age of fifteen, she and her family were taken by cattle car to Auschwitz, and Elly never saw her mother or her brother again. Elly survived the Holocaust, and now, she has dedicated her life to telling the stories of those who did not. Elly was featured on CBS's 60 Minutes for her involvement in the lawsuit brought against Volkwagen, which used Jewish slave labor during the Holocaust. Elly was also featured in Steven Spielberg's SURVIVORS OF THE SHOAH. She lives in Queens, New York with her family.