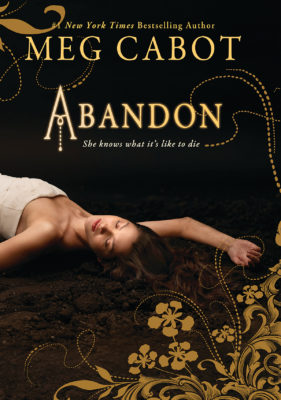 Pierce knows what it's like to die, because she's done it before. Though she tries returning to the life she knew before the accident, Pierce can't help but feel at once a part of this world, and apart from it. Yet she's never alone . . . because someone is always watching her.

Now she's moved to a new town, but even here, he finds her. Pierce knows he's no guardian angel, and his dark world isn't exactly heaven, yet she can't stay away . . . especially since he always appears when she least expects it, but exactly when she needs him most.

If she lets herself fall any further, she may just find herself back in the one place she most fears: the Underworld.

--- - From Abandon
The thing that stood out to me that day about that particular crypt—besides its age—was that its door had been secured by a number of chains. The gate, though ornate, was rusty, and even bent in places.
But the chains were all brand new. So were the locks securing them. Someone seemed very concerned about break-ins. Break-ins. To an old crypt.
It wasn’t until much later—until it was too late, actually—that I learned it wasn’t someone breaking in that had people concerned.
They were worried about someone breaking out.