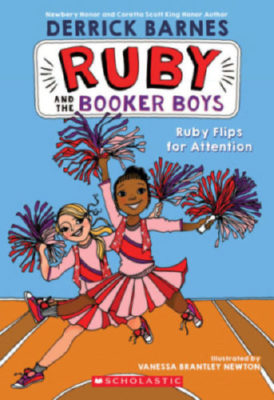 Ruby and the Booker Boys #4: Ruby Flips For Attention

After watching her big cousin Kee Kee compete in a cheerleading competition, Ruby attempts to copy some of the high-flying moves she saw earlier. This cheerleading stuff could be just the thing to bring her a ton of attention. But during practice with Marcellus, she injures her arm and must be rushed to the hospital. The doctors fit her with a hot-pink cast that turns out to be a great conversation piece. After giving a million different versions of the accident to everyone at school, she becomes the center of attention after all!
Vanessa Brantley Newton