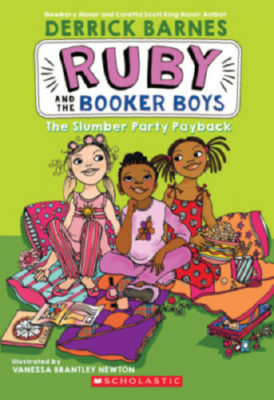 Brought to you by Newbery Honor author Derrick Barnes, eight-year-old Ruby Booker is the baby sis of Marcellus (11), Roosevelt (10), and Tyner (9), the most popular boys on Chill Brook Ave. When Ruby isn't hanging with her friend, Theresa Petticoat, she's finding out what kind of mischief her brothers are getting into. She's sweet and sassy and every bit as tough as her older siblings.

And now, look out! Ruby's hosting a big pink slumber party! The last time Ruby hosted a slumber party, her big brother Roosevelt played tricks on her and her friends all night long.

Well, it's payback time! When it comes to teaching Ro a lesson, a little lipstick and a lot of know-how can go a long way.