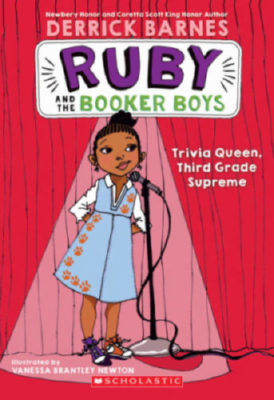 Brought to you by Newbery Honor author Derrick Barnes, eight-year-old Ruby Booker is the baby sis of Marcellus (11), Roosevelt (10), and Tyner (9), the most popular boys on Chill Brook Ave. When Ruby isn't hanging with her friend, Theresa Petticoat, she's finding out what kind of mischief her brothers are getting into. She's sweet and sassy and every bit as tough as her older siblings.

And now, bring on the spotlight! Ruby Booker is ready to shine! Her chance is coming up: There's an animal trivia contest at her school, and the winner gets season passes to the Chill Brook Zoo for everyone in his or her grade! The problem is, she needs a little help...
Vanessa Brantley Newton