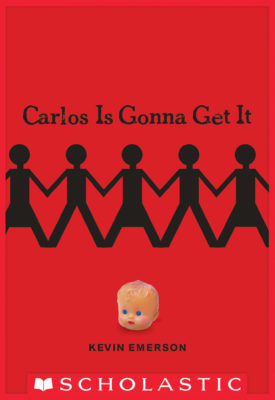 Carlos Is Gonna Get It

How strange is Carlos? REALLY strange. He scratches himself all the time, and he talks about aliens in this weird shaky voice, and he breaks up the class and gets everyone else in trouble when it's *his* fault he's such a freak.

So Trina, Donte, Thea, Sara, and Frankie decide to use the upcoming 7th-grade class trip to "get" Carlos and scare him into acting normal. But when Trina has to work with Carlos on a class project, she discovers both his sweetness and the full extent of his troubles. Will she pull out of the plan or go through with it? And what will happen if--when--Carlos gets it?

Kevin Emerson is not currently a vampire, but he does live in Seattle. He taught in elementary schools for several years and now works at a writing center called 826 Seattle and sings and plays drums in a few bands. He's been writing stories since he was a kid. Visit Kevin online at www.kevinemerson.net.