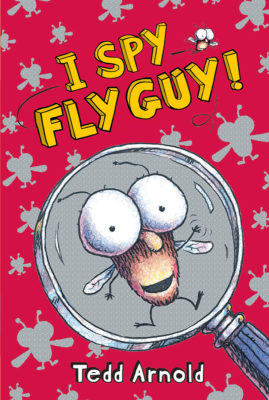 When Fly Guy and Buzz play hide-and-seek, Fly Guy hides in his favorite place--the garbage can. But as Buzz finishes counting, the garbageman drives away with the garbage and Fly Guy, too! A very worried Buzz follows the truck to the dump, where he sees zillions of flies. Where is Fly Guy?!

Time after time, Buzz thinks he spies Fly Guy, only to be snubbed, boinked, or bitten. Then he realizes they've been playing a game. He yells, "I give up. You win!" And Fly Guy leaves his new hiding place--he was on top of Buzz's hat all along!

Tedd Arnold is the bestselling author and illustrator of the Fly Guy series, Green Wilma, Parts, and other popular picture books. He is also the illustrator of Detective Blue. He has received Theodor Seuss Geisel Honors for Hi! Fly Guy and I Spy Fly Guy! Tedd lives with his wife, Carol, in Florida.