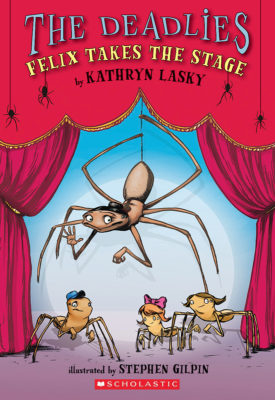 The Deadlies: Felix Takes the Stage

The Deadlies are like any other family with a loving mother and bright, rambunctious children. Except they're spiders. Really, really poisonous ones. But Edith and her children are kind and cultured - they would never hurt anyone.

The Deadlies had been happily living in a symphony hall until Edith's son, Felix, had a . . . misunderstanding with the maestro. Now they're on the hunt for a new home. That is, if they can outwit the evil exterminators on their tail. Will they ever find a place to live in peace?