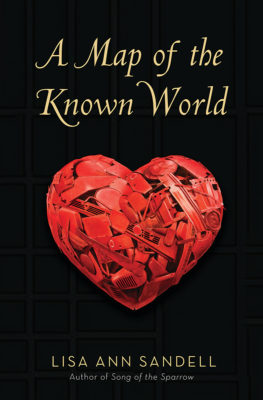 A Map of the Known World

Cora Bradley dreams of escape. Ever since her reckless older brother, Nate, died in a car crash, Cora has felt suffocated by her small town and high school. She seeks solace in drawing beautiful maps, envisioning herself in exotic locales. When Cora begins to fall for Damian, the handsome, brooding boy who was in the car with Nate the night he died, she uncovers her brother's secret artistic life and realizes she had more in common with him than she ever imagined. With beautiful lyricism, Sandell weaves a tale of one girl's journey through the redemptive powers of art, friendship, and love.

Lisa Ann Sandell is the author of A Map of the Known World, of which Publishers Weekly wrote in a starred review, "Sandell's...fluid phrasing and choice of metaphors give her prose a quiet poetic ambience." She also wrote Song of the Sparrow, which Publishers Weekly called "unique and eloquently wrought" in a starred review. Lisa works as a children's books editor and lives in New York City with her family. Please visit her online at lisaannsandell.com.