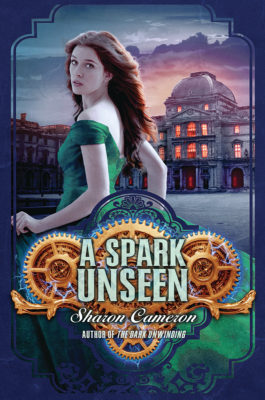 When Katharine Tulman wakes in the middle of the night and accidentally foils a kidnapping attempt on her uncle, she realizes Stranwyne Keep is no longer safe for Uncle Tully and his genius inventions. She flees to Paris, where she hopes to remain undetected and also find the mysterious and handsome Lane, who is suspected to be dead.

But the search for Lane is not easy, and Katharine soon finds herself embroiled in a labyrinth of political intrigue. And with unexpected enemies and allies at every turn, Katharine will have to figure out whom she can trust--if anyone--to protect her uncle from danger once and for all.

Filled with deadly twists, whispering romance, and heart-stopping suspense, this sequel to THE DARK UNWINDING whisks readers off on another thrilling adventure.
Sharon Cameron

--- - From A SPARK UNSEEN
I opened my eyes, the air in my bedchamber pulsing with the kind of silence that only comes in the wake of sound -- a sound that never should have been there. I waited, listening. Shadows hid the dressing table, my bookshelves, the roses on the wallpaper, each window swathed in a shroud of black. But my room was empty. I felt this as certainly as the satin coverlet clutched in my hand. And then it came again. A soft clink of metal, and a creak of floorboard in the hall. I watched a shaft of yellow light move across the crack beneath my door.
I flung back the coverlet and ran, barefoot and noiseless across the carpet, all thought now narrowed to a single key that stood in the lock on my door. The same key I had forgotten to turn before climbing into bed. My feet stopped of their own accord just before the door, my nightgown tangled about my knees, and quietly I pressed one cheek against the cold mahogany while my left hand felt through the darkness, searching for the key. There was a low murmur in the corridor, a man's timbre, and an answering grumble. Two of them. My fingers found the key. I turned it, slowly, dreading its click. And just as slowly, I felt the knob above my key begin to move, twisted by a hand I could not see on the other side. The door locked with an audible thunk just as the knob gave a short rattle.