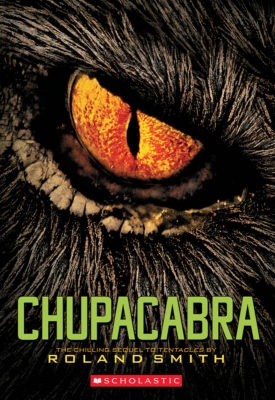 A mythic creature, a captive girl, and trouble at every turn!

Marty O'Hara and his best friend, Luther Smyth, have set off on their most urgent quest yet: an undercover search not for another mythical cryptid, but for Grace Wolfe -- Marty's cousin, Luther's friend, and the daughter of famed zoologist Travis Wolfe. Hoping to find out more about her mother, Grace has formed a shaky alliance with her grandfather, the notorious Noah Blackwood. Now she's living with him at his Seattle Ark . . . where she feels just as captive as all the other animals in his zoo.

But strange experiments are taking place in the levels of laboratories beneath the Blackwood's Ark. Because if Noah Blackwood can't trap a cryptid, then he and his team of mad scientists just might have to create one. With Blackwood's henchman Butch McCall hot on the kids' heels and trouble at every turn, are Marty, Luther, and Grace on a collision course with a blood-sucking chupacabra?

The man with the white coat and shining mirror eyes opened the door. The chupacabra moved farther back into his den, his powerful hind legs pressed into the corner.
\t\"Hungry?\" the man said.
\tThe chupacabra did not move. He stared at the man's hand. It was wrapped in cloth as bright as the man's coat. He had tasted the man's blood and wanted more. But he stayed where he was . . . still, silent.
\t\"I have something that will get you out of that box,\" the man said.
\tThe chupacabra knew what was coming. He felt liquid dripping from his jaw. His belly rattled like the doors. But he stayed where he was. Watching. Waiting."