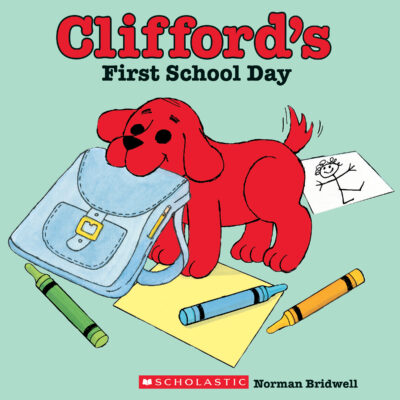 Emily Elizabeth remembers taking her small red puppy Clifford to school and all the comical calamities that occured there. Clifford tries to fingerpaint and, sliding through the paint, makes a very creative masterpiece. Then, during water play, he is captain of the ship, until he tips over the mast and falls into the water! A bag of flour used to make cookies for snack time intrigues Clifford, until it falls on him, and covers him with white powder! Oh Clifford! However, he's not done yet. Outside, Emily Elizabeth puts him on a slide and, CRASH! He lands in someone's sand castle! But Clifford helps repair it and all is well. Emily Elizabeth's teacher asks her to bring Clifford back when he's a little bigger. As Emily Elizabeth says, "She should see him now."

Featuring a full page of stickers!