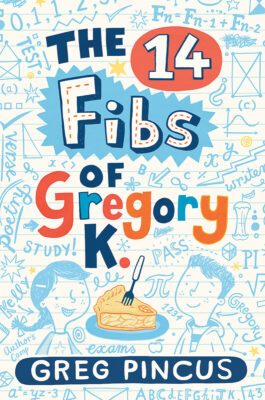 Gregory K is the middle child in a family of mathematical geniuses. But if he claimed to love math? Well, he'd be fibbing. What he really wants most is to go to Author Camp. But to get his parents' permission he's going to have to pass his math class, which has a probability of 0. THAT much he can understand! To make matters worse, he's been playing fast and loose with the truth: "I LOVE math" he tells his parents. "I've entered a citywide math contest!" he tells his teacher. "We're going to author camp!" he tells his best friend, Kelly. And now, somehow, he's going to have to make good on his promises.

Hilariously it's the "Fibonacci Sequence" -- a famous mathematical formula! -- that comes to the rescue, inspiring Gregory to create a whole new form of poem: the Fib! Maybe Fibs will save the day, and help Gregory find his way back to the truth.

For every kid who equates math with torture but wants his own way to shine, here's a novel that is way more than the sum of its parts.
Greg Pincus

Greg Pincus is a children's poet and novelist, a screenwriter, a former volunteer elementary school librarian, and a social media strategist. He is also an active member of the Society of Children's Book Writers and Illustrators. He lives in Los Angeles, California, and can be found online at gottabook.blogspot.com, or on Twitter as @GregPincus.