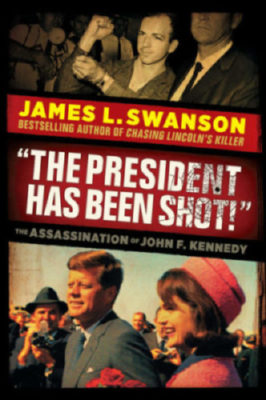 The President Has Been Shot!: The Assassination of John F. Kennedy

In his new young-adult book on the Kennedy assassination, James Swanson will transport readers back to one of the most shocking, sad, and terrifying events in American history. As he did in his bestselling Scholastic YA book, CHASING LINCOLN'S KILLER, Swanson deploys his signature "you are there" style -- a riveting, ticking-clock pace, with an unprecedented eye for dramatic details and impeccable historical accuracy -- to tell the story of the JFK assassination as it has never been told before.

The book is illustrated with archival photos, diagrams, source notes, bibliography, places to visit, and index.

James L. Swanson is the award-winning author of the bestseller Manhunt: The 12-Day Chase for Lincoln's Killer. His other books include Chasing Lincoln's Killer, an adaptation of Manhunt for young adults, and his follow-up, "The President Has Been Shot!: The Assassination of John F. Kennedy", which was a finalist for the YALSA-ALA Excellence in Young Adult Nonfiction award. He has held a number of government and think-tank posts in Washington, D.C.

--- - ! '"The president was running late. The handshaking at Love Field, plus the two stops for the clever children and the admiring nuns, had put him at least five or ten minutes behind schedule. Oswald waited by the window. Whenever his eyes searched Houston Street for the first signs of the motorcade, he was careful to not hold the rifle high in his hands. Someone on the ground might see him and warn the authorities.

Finally, the police motorcycles, their red lights flashing, and trailed by the lead car carrying the Dallas chief of police, reached the corner of Main and Houston and then turned right onto Houston. The Texas School Book Depository stood one block ahead. Oswald saw the motorcycles first. Then he saw the police chief''s white car. Then he spotted what he had been waiting for--the big, gleaming, midnight-blue limousine carrying the president of the United States. And from the moment Oswald saw that car turn onto Houston Street, he knew with 100 percent certainty that one of its six occupants had to be John F. Kennedy. If Oswald fixed his gaze on the car, he must have noticed in the distance what appeared to be an unusually bright pinpoint of color toward the rear of the vehicle. It was Jacqueline Kennedy, her pink suit and pill box hat glowing like a signal beacon. And right next to her sat the president."'