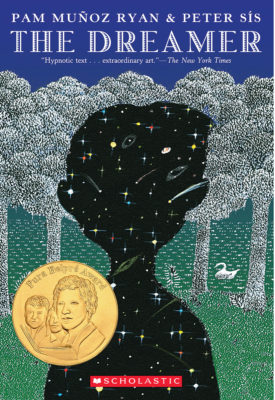 From the time he is a young boy, Neftalí hears the call of a mysterious voice. Even when the neighborhood children taunt him, and when his harsh, authoritarian father ridicules him, and when he doubts himself, Neftalí knows he cannot ignore the call. He listens and follows as it leads him under the canopy of the lush rain forest, into the fearsome sea, and through the persistent Chilean rain on an inspiring voyage of self-discovery that will transform his life and, ultimately, the world.

Combining elements of magical realism with biography, poetry, literary fiction, and transporting illustrations, Pam Muñoz Ryan and Peter Sís take readers on a rare journey of the heart and imagination as they explore the inspiring early life of the poet who became Pablo Neruda.

Peter Sís is a Hans Christian Andersen Award winner, three-time Caldecott Honoree, Sibert Award winner, and MacArthur Fellow. His celebrated picture books include Ice Cream Summer, Starry Messenger: Galileo Galilei, Tibet Through the Red Box, and The Wall: Growing Up Behind the Iron Curtain.He also creates fine art that can be seen in galleries, museums, and public spaces all over the world. Learn more at petersis.com.