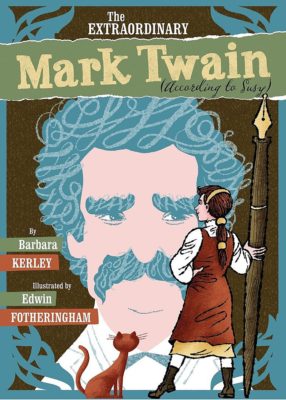 The Extraordinary Mark Twain (According To Susy)

"This is a frank biographer and an honest one; she uses no sandpaper on me." - Mark Twain

From the award-winning team behind What to Do About Alice?, comes a humorous and intimate portrait of the most celebrated writer in America, as told by his thirteen-year-old daughter.

Susy Clemens thought the world was wrong about her papa. They saw Mark Twain as "a humorist joking at everything." But he was so much more, and Susy was determined to set the record straight. In a journal she kept under her pillow, Susy documented her world-famous father-from his habits (good and bad!) to his writing routine to their family's colorful home life. Her frank, funny, tender biography (which came to be one of Twain's most prized possessions) gives rare insight and an unforgettable perspective on an American icon. Inserts with excerpts from Susy's actual journal give added appeal.

Edwin Fotheringham’s stylish, award-winning illustrations have graced the pages of The New Yorker, The Wall Street Journal, The New York Times, and many other publications. He has illustrated numerous highly acclaimed nonfiction picture books, such as Barbara Kerley's What to Do About Alice?, a Sibert Honor Book and a Boston Globe-Horn Book Award Honor Book; The Extraordinary Mark Twain (According to Susy), a New York Public Library Best Children's Book; Those Rebels, John & Tom, an NCTE Orbis Pictus Award Honor Book; and A Home for Mr. Emerson, a NAPPA Gold Award winner; as well as younger fiction picture books, such as Pam Muñoz Ryan's Tony Baloney and the eponymous beginning reader series, Jennifer Hamburg's Monkey and Duck Quack Up!, a spring 2015 Indie Favorite, and Andria Rosenbaum’s Big Sister, Little Monster. Ed lives in Seattle, Washington. Visit him online at edfotheringham.com.

Barbara Kerley is a two-time Sibert Honoree and a Boston Globe-Horn Book Honoree whose award-winning biographies include What to Do About Alice?, The Extraordinary Mark Twain (According to Susy), Those Rebels, John & Tom, and A Home for Mr. Emerson, all illustrated by Edwin Fotheringham; Tigers & Tea with Toppy, illustrated by Matte Stephens; and The Dinosaurs of Waterhouse Hawkins and Walt Whitman: Words for America, illustrated by Brian Selznick. Kerley's books have all been praised for their lively prose, meticulous research, and artistic presentation style. She lives in Portland, Oregon. Visit her online at barbarakerley.com.