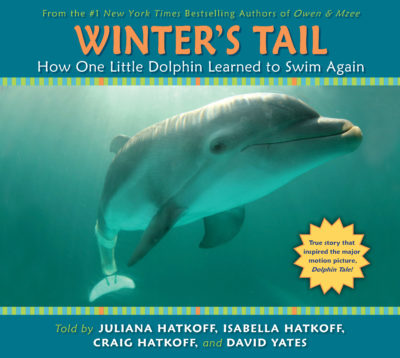 When Winter was a baby, she was rescued from a crab trap, her tail seriously damaged, and rushed to Clearwater Marine Aquarium. Winter survived, but eventually her tail fell off. Then Winter received a prosthetic tail. It was very challenging but now Winter is thriving and using her new tail with great command. Every year, thousands of visitors travel to visit Winter who has become an inspiration to adults and children alike, especially to children who are amputees themselves. And now Winter's story is soon to be a major motion picture starring Morgan Freeman, Ashley Judd, and Harry Connick Jr.!

Craig Hatkoff, Isabella Hatkoff, and Juliana Hatkoff are also the authors of Knut: How One Little Polar Bear Captivated the World and Looking for Miza: The True Story of the Mountain Gorilla Family Who Rescued One of Their Own. The Hatkoffs live in Manhattan.

David Yates is the CEO of the Clearwater Marine Aquarium. He initiated a marketing and media plan that shared Winter's amazing story with the world, leading to the major motion picture DOLPHIN TALE, which Yates co-produced. Yates is also a three time Emmy Award winner, producer and writer of the documentary WINTER, THE DOLPHIN THAT CAN, and an executive producer of DOLPHIN TALE 2.