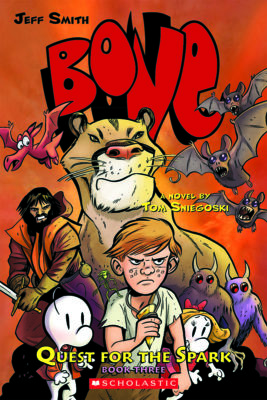 Bone: Quest for the Spark #3

Series: Bone: Quest for the Spark

The Nacht is growing stronger, and it's a race against time for Tom Elm and friends to find the final piece of the Spark before the entire Valley--and possibly the world--are plunged into eternal darkness. In this installment, the Queen of the Sky is brought down in the Pawa Mountains and our intrepid band of heroes is separated. What secrets can be found deep inside the mountains' caverns? Will the great mountain cat, Roque Ja, be ally or enemy? And will one of their very own betray them to evil?

Jeff Smith is the creator of the award-winning, New York Times bestselling BONE series. He was born and raised in the American Midwest and learned about cartooning from comic strips, comic books, and TV animation. Visit him online at boneville.com.

Tom Sniegoski is the NEW YORK TIMES bestselling author of more than two dozen novels, including The Fallen, a teen fantasy quartet. He lives in Massachusetts with his wife and their French bulldog puppy. Visit him online at www.sniegoski.com.

--- - ! "The Nacht reared up upon his thick back legs and spread his ebony wings. The surrounding gloom lifted like a fog to reveal the most nightmarish of visions.
\tAs far as the Red Dragon could see were bodies, all caught in the grip of an endless sleep. Holy men lay scattered amongst the normal folk of the Valley" - ! " royalty slumbered with dragons. Each and every one having fallen victim to the growing power of the Nacht.
\tThe situation was far worse than the Red Dragon had ever imagined, but there was still a chance that the Nacht could be defeated.
\tFor the Dreaming had seen this threat--the threat of all-consuming darkness--and had planned.
\tJust in case.
\t\"Your silence speaks volumes, brother,\" the Nacht growled happily, as he walked amongst those who slept.
\tHe stopped before what appeared to be a curtain of absolute blackness. \"Beyond this wall is the prize,\" the Nacht purred. He raised a taloned hand and placed it against the obstruction. \"The Waking World, just waiting for the darkness to flow like an ocean over the land.\"
\tThe Dragon ran his razor-sharp claws over the shadow wall, slivers of night raining down to be lost amongst the shadows at his feet.
\t\"Already the work has begun,\" he continued. \"Little by little, piece by piece, the wall is coming down.\"
\tThe last thought to go through the Red Dragon's mind before sleep claimed him once more was that there was still a chance for this nightmare to end.
\tThe spark of a chance.
\tFor from a spark, there often came fire."