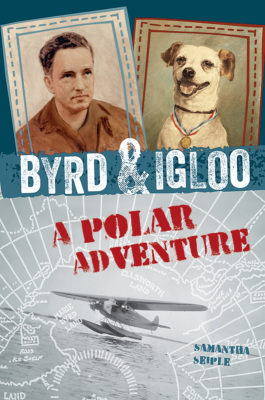 BYRD & IGLOO is the first narrative nonfiction book to tell the daring adventures of legendary polar explorer and aviator Richard Byrd and his lovable dog explorer, Igloo. Byrd is known for being the first to fly a plane over the North and South Poles, while Igloo is famous for being the only dog to explore both the North and South Poles. The adventures of Byrd and Igloo opened the door for science and research in the Antarctic. Featuring direct quotes from letters, diaries and interviews, newspaper clippings, expedition records, maps, charts, as well as never-before-seen photos, it will give the complete story of the explorers' journey. Though rooted in history with evidence from many museums and research centers, Byrd & Igloo will be exciting in tone, making it accessible and interesting for young readers.
Samantha Seiple

--- - Waddling on the ice and coming right up to the side of the ship was a 3-foot tall Emperor penguin. Igloo stood up on his hind legs, his two front paws resting on the railing. He looked hard at the black and white penguin with bright yellow ear patches. Igloo barked at it happily. Then the penguin disappeared among the ice.
The ship once again began hammering through the ice when Igloo saw two small penguins pop up onto the ice. They tilted their heads to their sides, waved their flippers, and shuffled toward the ship. Igloo was beside himself, and he ran up and down the deck, barking.
“There was great hilarity aboard for awhile,” said Byrd. “These comical creatures came to us unafraid, with friendly waves of flippers, tobogganing with great speed on their bellies across ice floes.”
Some of the crew jumped off the ship onto the ice to play with the penguins. Igloo tried to jump off too. But his plan was thwarted when Byrd grabbed his collar before he could join in on the fun. Nevertheless, as long as the Adélie penguins were nearby, Igloo didn't take his eyes off of them.