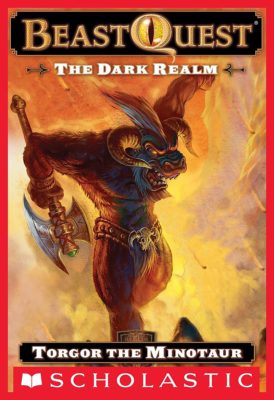 The good Beasts of Avantia are in danger. They have been captured by six terrible new Beasts and taken to Gorgonia, kingdom of the evil wizard Malvel. To free the Beasts, Tom and Elenna must journey into the sinister Dark Realm.

There, Tom meets one of the deadliest creatures he has ever faced. Huge, with terrifying horns and a shining golden ax, Torgor the Minotaur will stop at nothing to serve his mater. But Tom is determined to defeat the Beast, bringing him one step closer to victory of Malvel.
Adam Blade