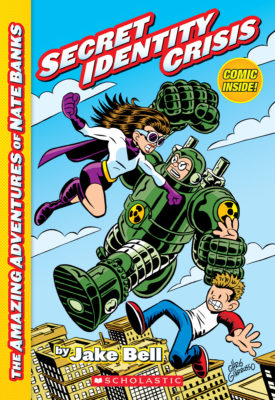 As the three-time winner of the Ultimate Comic Book Trivia Championship of Knowledge, Nate Banks has always been the sixth grade's biggest comic book expert. But when a mysterious new superhero shows up in town, not even Nate knows who she really is. And when he sets out to discover Ultraviolet's secret identity, all of the clues seem to lead Nate to the least likely suspect-his uptight history teacher, Ms. Matthews! Could she really be moonlighting as a super-powered crime fighter? It's up to Nate to find out!
Jake Bell

Jake Bell has worked as an accountant, a TV sports anchor, a radio disc jockey, a stagehand, a professional wrestling referee, a movie studio intern, a file clerk at a law office, a bagel baker, a minor league second baseman, a marketing consultant, a magician, a cameraman, and an amusement park bathroom cleaner. He lives in Phoenix, Arizona with his two kids, from whom he regularly poaches ideas for his writing.