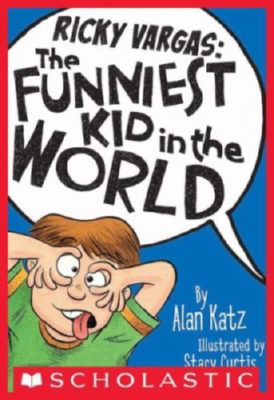 Ricky Vargas #1: The Funniest Kid in the World

Ricky Vargas is funny. He is so funny he can make you snort milk out of your nose...even if you're not drinking any!

In three stories, Ricky manages to get carried away at the school spelling bee, ruin the class picture, and speak his own language. But don't worry, no matter what trouble Ricky finds himself in, he always knows just how to make it better--after all, who could be upset with the funniest kid in the world for long?
Stacy Curtis

Stacy Curtis is an award-winning cartoonist, illustrator and printmaker who draws editorial cartoons, comics and illustrations for various publications and web sites. Stacy lives in the Chicagoland area with his wife, Jann, and their dog, Derby. You can visit him at www.stacycurtis.com

Alan Katz
has been a print and television comedy writer for more than twenty years.
In addition to being a multiple Emmy nominee for his work on The Rosie
O'Donnell Show and Disney's Raw Toonage, he has written for children's
programming on Nickelodeon, ABC Television, Warner Brothers Animation's
Taz-Mania, and many others. Alan lives in Weston, Connecticut with his
family.