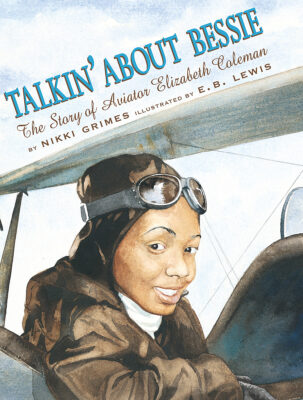 Talkin' About Bessie: The Story of Aviator Elizabeth Coleman

by Nikki Grimes, Illustrated By E. B. Lewis

Elizabeth "Bessie" Coleman was always being told what she could & couldn't do. In an era when Jim Crow laws and segregation were a way of life, it was not easy to survive. Bessie didn't let that stop her. Although she was only 11 when the Wright brothers took their historic flight, she vowed to become the first African -American female pilot. Her sturdy faith and determination helped her overcome obstacles of poverty, racism, and gender discrimination. Innovatively told through a series of monologues.
Nikki Grimes

E. B. Lewis Won a Caldecott Honor for COMING ON HOME SOON by Jacqueline Woodson. He has also won the Coretta Scott King Award and Coretta Scott King Honor three times. He graduated from Temple University's Tyler School of Art and now teaches at the University of the Arts in Philadelphia. Mr Lewis lives in Folsom, New Jersey. Visit www.eblewis.com to learn more.