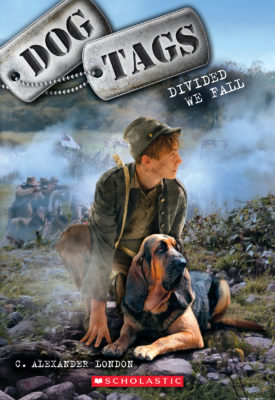 LOYALTY ABOVE ALL ELSE.

Although he's too young to join the Confederate Army, Andrew is welcomed into the Home Guard, a group of men who track down deserters and runaways. He and Dash make a great team. But hunting people is very different from hunting raccoons. And soon Andrew's loyalty will be tested like never before.

Dog Tags is a series of stand-alone books, each exploring the bond between soldier and dog in times of war.
C. Alexander London

"I got it, boy," I told him, and I unslung my rifle. There was a bloody streak running up the trunk, and I followed it with my eyes to where the branches started, and I searched and searched, like I was looking for a raccoon hiding up the tree. Then I saw it, the curled-up shape of a person trying to keep out of sight in the crook of a big branch where the leaves was still thick. Every time he moved, a rain of yellow, red, and orange leaves spiraled down from the branch and settled on the ground. No foolin'' those leaves. They gave his position away with their rustlin'' and fallin''.

I heard no reply, but I saw the figure move, and it almost took my breath outta me. It weren''t no deserter up in the tree, and it weren''t no man either. It was a girl, her skin dark as a moonless night, her clothes all torn and tattered, her hair knotted and tangled with leaves and thorns and such, and her bare feet and legs bleeding something fierce.

I didn''t need to have Pa''s smarts to know what she was: contraband. That''s what folks call a runaway slave.

She was the first one I ever saw, and it was my duty as a citizen of the South to bring her to justice.'