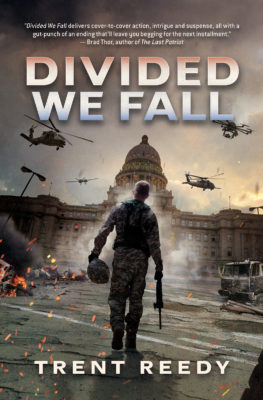 Danny Wright never thought he'd be the man to bring down the United States of America. In fact, he enlisted in the Idaho National Guard because he wanted to serve his country the way his father did. When the Guard is called up on the governor's orders to police a protest in Boise, it seems like a routine crowd-control mission ... but then Danny's gun misfires, spooking the other soldiers and the already fractious crowd, and by the time the smoke clears, twelve people are dead.

The president wants the soldiers arrested. The governor swears to protect them. And as tensions build on both sides, the conflict slowly escalates toward the unthinkable: a second American civil war.

With political questions that are popular in American culture yet rare in YA fiction, and a provocative plot that asks what happens when the states are no longer united, Divided We Fall is Trent Reedy's very timely YA debut.
Trent Reedy

Lieutenant McFee ordered our squad ahead with a hand motion. Sergeant Meyers on point held his rifle up above his head with both hands. I walked after them on the far left. Inside my gas mask, I could hear my every breath heavy and loud. I kept my thumb on the safety switch of my gun and my finger right next to the trigger.
"Oh God," I prayed. "Please help me get out of this one. This stuff isn't cool anymore. I just want to –"
Something smacked into my mask and my weapon went off. Through the cracked plastic of the eyepieces, I saw the flash out of the end of my barrel.
“Hold your fire!” someone shouted.
How had that happened? Someone threw a rock and hit me and I was surprised. Must have accidentally –
Another gunshot went off. Wasn't me. A third shot.