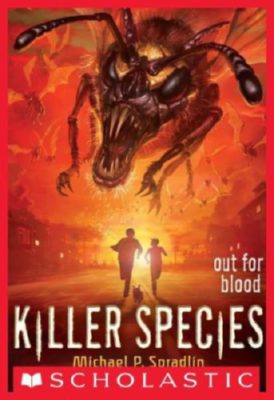 Killer Species #3: Out for Blood

Dr. Catalyst has finally come unhinged. Twice the crazed scientist has released his super predators into the wild to combat invasive species, and twice Emmet Doyle and his best friend Calvin Geaux have exploded his efforts.

Now he's out for something more than just snakes and fish. Dr. Catalyst wants revenge.

It's a quiet night when Emmet takes his dog, Apollo, out for a walk in the backyard. Until the noise begins. Part batlike screech, part insect buzz -- it seems to be coming from the roof. Suddenly the sky is full of dark, beating shapes, and they're all headed straight for Emmet.

Dr. Catalyst's newest creations are hungry, and only one thing will satisfy them. Blood.
Michael P. Spradlin