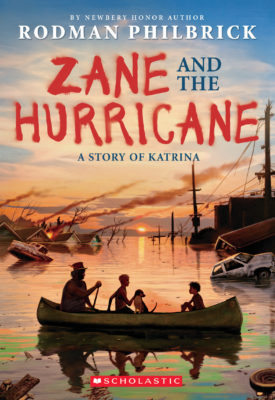 Zane Dupree is a charismatic 12-year-old boy of mixed race visiting a relative in New Orleans when Hurricane Katrina hits. Unexpectedly separated from all family, Zane and his dog experience the terror of Katrina's wind, rain, and horrific flooding. Facing death, they are rescued from an attic air vent by a kind, elderly musician and a scrappy young girl--both African American. The chaos that ensues as storm water drowns the city, shelter and food vanish, and police contribute to a dangerous, frightening atmosphere, creates a page-turning tale that completely engrosses the reader. Based on the facts of the worst hurricane disaster in U.S. history, Philbrick includes the lawlessness and lack of government support during the disaster as well as the generosity and courage of those who risked their lives and safety to help others. Here is an unforgettable novel of heroism in the face of truly challenging circumstances.