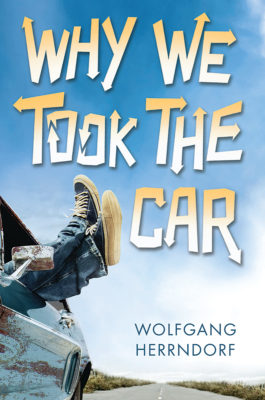 Why We Took the Car

Mike Klingenberg doesn't get why people think he's boring. Sure, he doesn't have many friends. (Okay, zero friends.) And everyone laughs at him when he reads his essays out loud in class. And he's never invited to parties - including the gorgeous Tatiana's party of the year.

Andre Tschichatschow, aka Tschick (not even the teachers can pronounce his name), is new in school, and a whole different kind of unpopular. He always looks like he's just been in a fight, his clothes are tragic, and he never talks to anyone.

But one day Tschick shows up at Mike's house out of the blue. Turns out he wasn't invited to Tatiana's party either, and he's ready to do something about it. Forget the popular kids: Together, Mike and Tschick are heading out on a road trip. No parents, no map, no destination. Will they get hopelessly lost in the middle of nowhere? Probably. Will they meet crazy people and get into serious trouble? Definitely. But will they ever be called boring again?

Not a chance.
Tim Mohr

Wolfgang Herrndorf (1965-2013) was born in Hamburg, Germany, and studied painting before turning to writing later in his career. He wrote several award-winning novels for adults, and WHY WE TOOK THE CAR was the receipient of the German Youth Literature Award.

Tatiana may not have invited the biggest losers to her birthday party, but she seemed to have invited everyone else with a pulse. We slowly passed the house. Nobody had seen us, and it occurred to me that I didn't have any idea how I was going to give Tatiana the Beyoncé drawing I'd painstakingly made for her. I began to think seriously about the idea of just tossing it out the window. Somebody would find it and take it to her. But before I could do something stupid, Tschick had stopped the car and hopped out. I watched him, horrified. I don't know if it's always so embarrassing to have a crush on somebody. Apparently I'm not very good at it. As I was debating whether to slump down and pull my jacket over my head or to put an it-wasn't-my-idea look on my face, fireworks started going off behind the redbrick house, exploding red and yellow in the sky, and almost everyone ran into the backyard. The only people left out front were Andre and Tatiana, who'd come to say hi to him.
\tAnd Tschick.
\tTschick was standing directly in front of them. I saw him start talking to Tatiana and saw her answer. She looked pissed. Tschick motioned to me behind his back. As if in a trance, I got out of the car and as for what happened next, don't ask me. I have no idea. I was suddenly next to Tatiana with the drawing in my hand, and I think she looked at me with the same pissed-off look she'd glared at Tschick with. But I didn't notice.
\tI said, “Here.”
\tI said, “Beyoncé.”
\tI said, “A drawing.”
\tI said, “For you.”
\tTatiana stared at the drawing, and before she had looked up from it I heard Tschick say to Andre, “Nah, no time. We have something to take care of.” He nudged me and went back to the car. I followed. Then the engine fired up. I pounded my fist on the dashboard as Tschick shifted into second gear and crept toward the end of the cul-de-sac.
\t“Want to see something cool?” he asked.
\tI didn't answer. I couldn't.
\t“Want to see something cool?” Tschick asked again.
\t“Do whatever you want!” I yelled. It felt as if a weight had been lifted from my shoulders, such a feeling of relief.
\tTschick revved the engine and raced toward the end of the cul-de-sac. Then he yanked the steering wheel first to the right and then the left and pulled the emergency brake at the same time. The car did a 180 right in the middle of the street and I nearly flew out the window.
\t“Step on it!” I shouted.
\t“I am.”
\t“Faster!” I yelled, watching my fists pound the dash. Relief does not begin to express the way I felt."