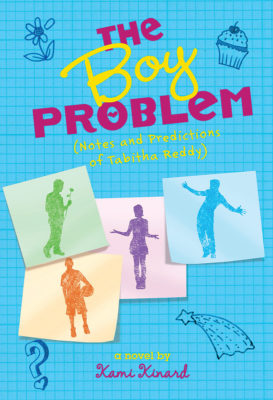 The Boy Problem: Notes and Predictions of Tabitha Reddy

Tabitha "Tabbi" Reddy believes in signs. Like fortune cookies. Magic 8-Balls. Shooting stars. And this year, she hopes, looking for the right signs will lead her to the right boy! Inspired by her BFF, Kara (star of THE BOY PROJECT), Tabbi starts her own "project" in the hopes of finding a cute crush. With the help of a math lesson on probability, Tabbi tries to predict who the right boy for her might be! Where is she most likely to meet him? What is he most likely to look like? Full of fun illustrations, hilarious equations, and lessons in cupcake-baking, life, love, and friendship, this book has a 100% probability of awesomeness. A perfect "next step" for fans of DORK DIARIES.
Kami Kinard

Kami Kinard enjoys writing about the boyfriend quest more than she enjoyed experiencing it. A teaching artist on the SC Arts Commission's Roster of Approved Artists, she writes from Beaufort, South Carolina, where she lives with her husband and two children. Please visit her online at: www.kamikinard.com.

\tMost people don't think it's possible to predict the future. I'm one of the exceptions.
\tI believe in signs--little clues that hint at things that might happen someday. You just have to be open to seeing them.
\tMy BFF, Kara McAllister, doesn't think like I do. She's what you'd call a cynic. I mean, a sign can be right in front of her face, pointing her down the road to future events, but she'd rather figure out a way to explain why it isn't a sign at all than go ahead and believe that it is one.
\tEarlier tonight a VERY OBVIOUS sign landed right under my nose. Literally. I know that it means something FANTASTIC is going to happen to me this year! But did Kara interpret it the way I did? Well . . . I'm not exactly sure.
\tWe'd gone to Triple Slice Pizza with Kara's boyfriend, Chip, to celebrate the last Friday before the start of the new school year. Kara and Chip sat on one side of the booth. I sat on the other. Alone.
\tSo even though they PROMISED that I wasn't one, I pretty much felt like a third wheel before we even placed our order. You don't have to be a math genius (and trust me, I'm not) to figure out these two equations:
\t2 + 1 = Third Wheel
\t3 - 1 = Date
\tDUH!
\t\"You're NOT a third wheel,\" said Kara, who was holding hands with Chip under the table.
\t\"Yes, I am,\" I said. \"And it looks like I'm going to be one forever. I'll never find the right guy!\"
\tAnyway, I was about to put the pizza down on the table when Kara looked over my shoulder and said, \"Hey, an absolutely adorable guy just walked in who totally looks like a third wheel! Let's invite him to sit with you!\"
\tI looked over my shoulder. I shouldn't have."