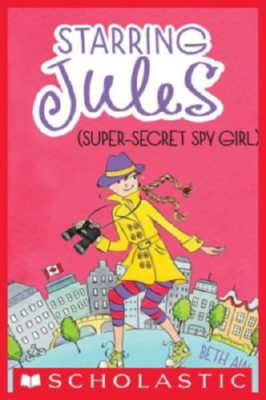 School is out, and Jules is hitting the road! She's off to Montreal where she'll film her first ever movie, The Spy in the Attic. But that means no friends around on her birthday and no birthday party. And with only a hockey player and diva starlet as cast mates in a town where no one speaks her language, Jules is feeling awfully lonely. Good thing her best friend Elinor is sending super-secret spy missions to
keep Jules busy. With a little stealth and a whole lot of gumption, she just might be able to turn her bummer summer into a blockbuster.
Beth Ain

\t“They say your movie is going to be a blockbuster,” Charlotte says the minute she sees me.
\t“Who says?” I say.
\t“Variety,” Charlotte says.
\t“What’s Variety?” I ask.
\t“It’s a magazine all about important things that happen in show business,” Charlotte says. “I can’t believe you don’t read it. You are seriously the worst child actress ever.”
\t“Well, maybe Jules doesn’t NEED a magazine to tell her things she already knows,” Elinor says, “because she’s an actual actress in an actual movie, so she already knows these things in the first place.”
\tWhat am I ever going to do without Elinor this summer?
\t“Well, anyway, between Rick Hinkley and Emma Saxony, who is practically perfect, I don’t think anyone will notice you so much, Jules, so that’s good,” Charlotte says. “You won’t have to be so crazy nervous all the time.”
\tI glare at her because I’m pretty sure she isn’t complimenting me.
\t“Anyway, have fun in England, Elinoh! Sorry you’re missing my luncheon,” Charlotte says before stomping away. She is throwing herself a going-to-sleepaway-camp luncheon at the diner. What makes it a luncheon and not just a lunch is the fact that it is a lunch party. I know this because I made the mistake of asking Charlotte when she invited me. “Oh, don’t leave without giving me your address,” she shouts from the swing set. “I’ll be writing to you all on scented stationery with scented markers.”
\t“She better not send me anything orange-scented,” I say.
\tMaybe I don’t read Variety, but I do know that this movie might end up being popular, and I am trying to forget about that since it makes me nervous. I have been trying to spend less time thinking about all these people going to sit in their sticky, squeaky movie-theater seats watching the spy version of me, and more time thinking about Canada and all the things I’m going to get to do there.
\t“She’s wrong anyway, Julesium.” Teddy Lichtenstein has arrived at the picnic. “According to research, any movie with a former sports star who tries to be a movie star doesn’t end up doing very well at all.”
\t“Thanks, Teddy,” I say.
\tWe run around and swing high on the swings and eat sushi rolls and grapes all afternoon until people start packing up. My mom and Teddy’s mom, Andie, barely ever look up from the conversation they are having on our blanket, and I wonder why they never run out of things to talk about.
\t“Elinor,” Mrs. Breedlove says, coming over to us, “we have to get on with it.”
\tAt this, my mom stands up and the two moms look at each other with the mom expression that means everyone is a little upset. My mom takes my hand and I know this means it’s time to say good-bye.
\t“Well,” Elinor says.
\t“Well,” I say.
\tMrs. Breedlove looks at the two of us just staring at each other. “Well,” she says in her very grown-up British way, “Mrs. Bloom and I have arranged for the two of you to e-mail each other whenever you want.” She smiles a big grown-up smile when she says this.
\tElinor and I jump up and down and scream-laugh at this news. “No stinky stationery for us!” Elinor says.
\t“Nope!” I say, and we give a quick hug while we’re still laughing.
\t“Okay, off we go,” Elinor’s mom says, pulling her away.
\t“See you in August, Jules!” Elinor says.
\t“Write the second you get there,” I say, and I turn away and start walking toward home, and fast. I have to shake off this good-bye pronto, since there’s nothing worse than saying good-bye to your still-brand-new best friend forever."