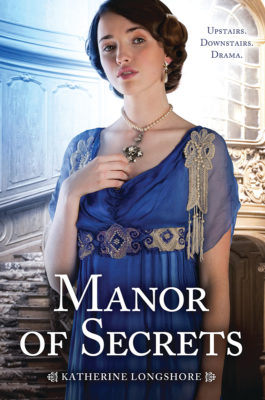 Lady Charlotte Edmonds: Beautiful, wealthy, and sheltered, Charlotte feels suffocated by the strictures of upper-crust society. She longs to see the world beyond The Manor, to seek out high adventure. And most of all, romance.

Janie Seward: Fiery, hardworking, and clever, Janie knows she can be more than just a kitchen maid. But she isn't sure she possesses the courage -- or the means -- to break free and follow her passions.

Both Charlotte and Janie are ready for change. As their paths overlap in the gilded hallways and dark corridors of The Manor, rules are broken and secrets are revealed. Secrets that will alter the course of their lives. . . forever.
Katherine Longshore

Katherine Longshore is a former costume designer, coffee house barista and preschool teacher who has finally found her calling writing historical fiction for teens. She is the author of GILT, TARNISH, and BRAZEN, a series of novels set in the court of Henry VIII published by Viking. After five years exploring castles and country manors in England, she now lives in California with three British citizens and one expatriate dog. Visit her online at www.katherinelongshore.com.

\t\"Who is that?\" Fran asked suddenly.
\tCharlotte craned her neck. All she saw were neighbors. Her mother's friends.
\t\"Who is who?\" she asked.
\t\"No, you little owl.\" Fran laughed. She pointed past the party, to where the lawn met the trees. \"Her.\"
\tThe girl definitely wasn't a party guest. Gray cotton dress, thick black stockings, and sensible black shoes. Her brown hair in its bun turned reddish in the sunlight. She glanced back over her shoulder quickly, giving Charlotte a split-second view of her face, then walked away, her stride purposeful.
\t\"The kitchen maid?\"
\t\"Why isn't she in the kitchen?\"
\tCharlotte wasn't sure she cared. \"Getting more cress for the sandwiches?\"
\tFran turned to face her. \"That is not where the gardens are. That is the way to the rockery and the lake.\"
\tFran stood with her arms akimbo, her gloved fists resting on the minty green skirts of her day dress. Demanding an answer.
\tCharlotte could only shrug.
\t\"You don't even care that one of your staff members is wandering off in the middle of a party?\" Fran asked. \"She should be in the kitchen. That girl is definitely up to something.\"
\tCharlotte imagined the kitchen maid meeting a boy in the forest, trading locks of hair and kisses. Or perhaps she was selling secrets to a spy.
\tNot that The Manor had any secrets to keep."