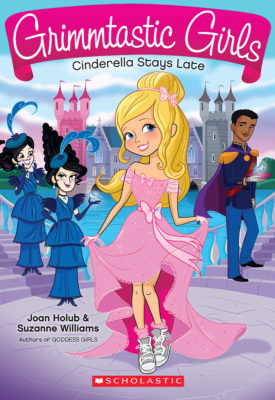 Once upon a time, in faraway Grimmlandia...

A Grimmtastic girl named Cinderella is starting her first week at Grimm Academy on the wrong foot. Cinda's totally evil stepsisters are out to make her life miserable. The Steps tease Cinda, give her terrible advice about life at the academy, and even make her look bad in front of her new friends, Red, Snow, and Rapunzel! But when Cinda overhears the Steps plotting a villainous deed that could ruin Prince Awesome's ball, Cinda, her new friends, and a pair of magical glass slippers have to stop them--before the last stroke of midnight!

Joan Holub has authored and/or illustrated more than 130 children's books. With Suzanne Williams she is the author of the popular Goddess Girls, Heroes in Training, and Grimmtastic Girls series. She lives in Raleigh, N.C. and can be found at www.joanholub.com.

Suzanne Williams is the author of nearly 40 books for children, including the award-winning picture book Library Lil (illustrated by Steven Kellogg) and the popular Goddess Girls series and Heroes in Training series, both co-authored with Joan Holub. For more about Suzanne and her books, visit www.suzanne-williams.com.