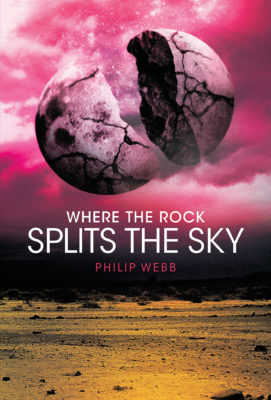 Where the Rock Splits the Sky

The world stopped turning long before Megan was born. Ever since the Visitors split the moon and stilled the Earth, permanent sunset is all anyone has known. But now, riding her trusty steed Cisco, joined by her posse, Kelly and Luis, Megan is on the run from her Texas hometown, journeying across the vast, dystopic American West to hunt down her father. To find him, she must face the Zone, a notorious landscape where the laws of nature do not apply. The desert can play deadly tricks on the mind, and the quest will push Megan past her limits. But to solve the mystery of not just her missing father but of the paralyzed planet itself, she must survive it--and an alien showdown.
Philip Webb

Philp Webb works as a "user experience consultant," helping his clients bridge the gap between technology and humanity. He has a computer science degree and a masters in human computer interaction. He lives with his family in West London.

He locks the door and leads us through empty corridors, past steel bar gates to a windowless cell. There is not another soul in the place. He gestures for me and Luis to sit on the swing-down bed. His face shines in the buttery glow of a single oil lamp.
\t\"Where are your deputies, Sheriff?\" I ask.
\tHe does not answer. A quiet fury underlies his gaze. I glance at Luis, wondering if we have made a mistake in coming here.
\t\"Put your head back.\"
\t\"What?\"
\tHe puts his hand roughly on my forehead and thumbs my eyelid back so I cannot blink. Luis jumps up, but the Sheriff reaches for his gun with a swiftness that takes my breath away.
\t\"Take it easy, son. I ain't itching to see more blood spilled today.\" He says it quietly, without a fuss.
\tHe holds me like this, gazing into my eyeball till it starts to stream. Then he lets go and slumps back against the wall of the cell, apparently calm again. I know what he's thinking -- that I am one of the Visitors, one who has stolen human form to walk the Earth.
\t\"You think we're abductee?\" Luis breathes.
\t\"I ain't taking no chances.\"
\tIt is clear, though, that he suspects only me.
\t\"What's the sign?\" I ask. \"How do you know I am not one of them?\"
\t\"Gold in the eyes,\" the Sheriff mutters. \"Like fire. Sometimes bright as a match flaring, sometimes just a glint. And sometimes it slips away for a while. But you wait long enough, it always comes back.\"
\tHe stares at me a while longer, deep in thought, before holstering his gun at last."